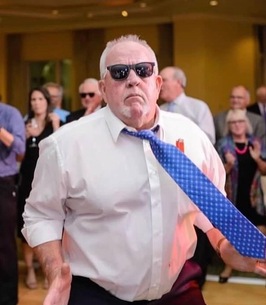 CARR, Thomas J. of South Dennis formerly of Winchester, passed away on February 20, 2022. He was the beloved husband of 39 years and best friend of Marlene (Messinger) Carr. Loving father of Kimmy Carr of Woburn, Tom Carr and his fiancé Marcy of Medford, and Andy Carr of Needham. Dear brother of John Carr and his wife Susan, Arthur “Buddy” Carr and his wife Kathy, Mike Carr and his wife Barbara, and the late Maryellen Carr. He will be greatly missed by his many in-laws, nieces, nephews and friends. Visiting hours will be held at the Lane Funeral Home, 760 Main St. (Rte. 38) WINCHESTER on Sunday, February 27th from 1-5pm. A Funeral Mass will be celebrated at St. Mary’s Church, 155 Washington Street, Winchester on Monday, February 28th at 11am. Relatives and friends are kindly invited to attend. Interment will be private. In lieu of flowers donations in Tom’s memory may be made to the Joslin Diabetes Center, One Joslin Place, Suite 745, Boston, MA 02215 or to Sand Dollars for Soldiers, 261 Main St., South Dennis, MA 02660.

Tom grew up in Winchester his entire life with his parents and siblings. He met lifelong friends and decided Winchester was also a perfect place to raise his family.

Tom went on to meet the love of his life Marlene in 1980. They were married in 1983. The two were inseparable and always had the best of times together. They went on to have 3 kids, who were his pride and joy. There wasn’t a time you could open his wallet and not find pictures of them all as he loved to show them off.

Tom spent his working career in the laborers union. He enjoyed his time working hard and cracking jokes on the work site. He was a supervisor and respected by many.

He spent many years coaching Woburn pop Warner football and loved every minute of it. He never forgot the players and would
Often share stories. He built many great friendships here.

After a short stint in professional wrestling he was always happy to tell you of his 0-1 career!

Tom would later retire on cape cod, one of he and Marlene’s favorite places. In his retirement, Tom became an avid Gardner. You’d likely even hear of his plants being referred to as his “girls”, to which Marlene and Kimmy only took some offense! In his spare time he loved fishing, meeting with friends at the Sand Dollar and above all spending time with his family.