To share your memory on the wall of Sally Kidd, sign in using one of the following options:

Receive notifications about information and event scheduling for Sally

We encourage you to share your most beloved memories of Sally here, so that the family and other loved ones can always see it. You can upload cherished photographs, or share your favorite stories, and can even comment on those shared by others.

Posted Feb 10, 2021 at 10:04pm
Larger than life and a life well lived. I met her at an MHC Alumnae event and she was the original "Uncommon Woman". My sympathy to her family.
Comment Share
Share via:
H

Posted Feb 09, 2021 at 12:35pm
Amazing woman so far ahead of her time. We miss her so much. During the summer of 2014 Sally said she wanted to do the ice bucket challenge, so with three nurses with their fingers ready to dial for medical support we did: https://youtu.be/hgbKTFsgiV8 -
Comment Share
Share via: 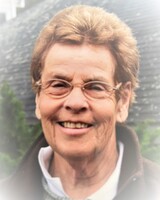