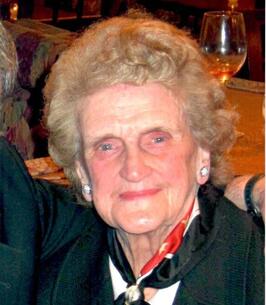 Mary Joy Of Winchester, formerly of Melrose, passed away on April 2,2022 at the age of 103. She was the beloved wife of the late William Joy who predeceased her in 1999 after 53 years of marriage. Mary was the sister of the late John, Catherine and William O'Brien and is survived by her sister Gertrude Shea.

Mary was born in Somerville on September 7,1918 to John H. and Eileen J. (Mageary) O'Brien. She graduated from Somerville High School in 1936 and business school thereafter. After a brief career in business, she married Bill, her high school sweetheart, in 1946 and together raised their nine children in Melrose. While she and Bill travelled widely, they most enjoyed spending summers in South Dennis with their extended family. In her later years, Mary doted on her grandchildren and great-grandchildren who returned her love to their "Nana". Mary had an indomitable spirit, an engaging personality and will be remembered fondly by neighbors, friends, and her many acquaintances. Mary was deeply devoted to her Catholic faith.

Her family would like to express its grateful appreciation to her caregivers from Clark Care and Hospice Care of Lahey Health for their devotion and attention to her care and comfort in her final years.

A Mass of Christian Burial will be celebrated on Wednesday April 6 at 11:00 AM at St. Mary's Church in Winchester. Interment at Wildwood Cemetery. Visitation is at 9:30 AM at The Lane Funeral Home, 760 Main St., WINCHESTER. Donations in Mary's name may be made to Catholic Charities of Boston, Winchester Hospital Foundation, or a charity of your choice.